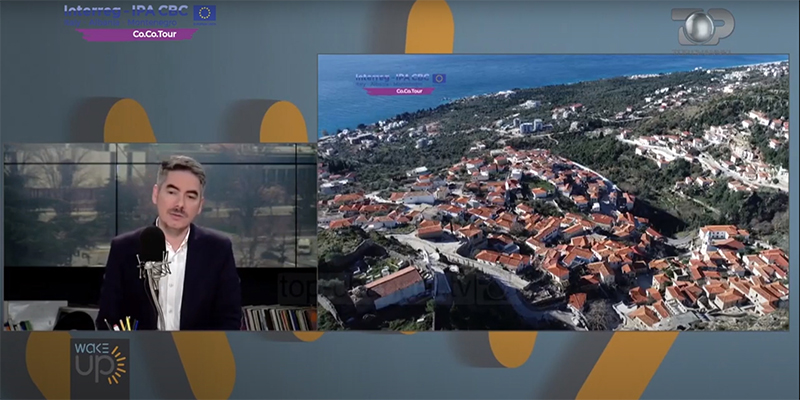 Promoting the Co.Co.Tour project and the Eco Museum model
Overview

On Monday, March 8, on International Women's Day, the ADF and the Municipality of Himara promoted the Co.Co.Tour project. During the interview, the objectives of the project, the partnership, and the construction of the Ecomuseum model were explained. The Co.Co.Tour project aims to ensure an inclusive and sustainable intelligent growth of coastal communities in the target areas, through the development of a cross-border eco-museum model and a common management strategy, focused on community tourism. The project is co-financed by the European Union under the Instrument for Pre-Accession Assistance (IPA II). The project is implemented in the municipalities of Tricase, Himara, and Herceg Novi. Mr. Ermal Ilirjani, head of the programming unit at the ADF, emphasized that Co.Co.Tour is Coastal Community Tourism. The project focuses on the preservation, improvement, and promotion of the natural, cultural, and historical heritage of the territory of coastal communities by developing the eco-museum model with the aim of intelligent and sustainable tourism management. Our goal for Himara is to bring these values as a touristic offer that serves the community and to present the values of the country, to generate incomes, and to compete with other markets. The model of the eco-museum allows us to initially introduce the Himara area inside the building through information, photos, stories, use of technology to spread this museum in the territory by diversifying the touristic package offer, extending the tourist season, and moving away from typical summer season tourism "sea and beach ”. Mr. Gentian Stratoberdha as project coordinator explained that the Ecomuseum is already an added value for the Tourism of the area. This model was developed based on the Port Museum of Tricase, Italy. The facilities will be at the service of the Municipality, the Community, tourists, and other stakeholders. The building of the Eco-Museum will serve as an initial exhibitor of the brands of the area, special areas where there is a traditional cuisine, the information in the territory, tourist attractions which are not well known by tourists, etc. Himara can be visited in two ways, land and sea, for this, we are working with tour operators and the community. Starting from the special day of the interview, Mr. Stratoberdha showed the impact of the project on the women of the area. They represent the economy and the family, consequently, they have been promoted by being included as business points mainly related to the traditions, which in Himara are numerous. The special thing is that the management of the Ecomuseum will be done mainly by women. The interview with the representative of the Municipality of Himara goes towards closing with the invitation to come and visit Himara, to see the diversity of natural, cultural, and spiritual heritages. Himara has a lot to discover and explore, nationwide tourists are welcome. At the end of the interview, Mr. Ilirjani said that the ADF in the Himara area and beyond, does not work only in the infrastructure of the area but also in capacity building, development programming, economic development, promoting governance at the local level, etc. One of the main goals is to promote locally based economies and interactions between businesses in order to have a sustainable economic development of the area and destination management.